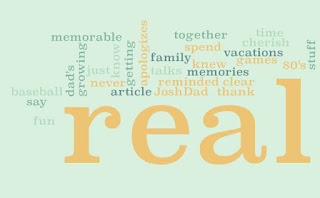 Thank you for the article Josh. It reminded me that when I was growing up in the 80's I don't have real and clear memories of my dad's apologizes or "getting real" talks. Not to say that you never did Dad, it just wasn't as memorable as our baseball games, family vacations and more fun stuff. I know you did what you could and knew how to do. I cherish the time we spend together on the phone while you live out your own life in Texas, playing golf, watching the weather channel and loving my mother. Today, I have learned that those getting real talks are just as important as that other stuff is...I contribute my success in this area to my recovery program. A program that has kept me from using mind altering drugs or alcohol since September 24, 2014. The 12-Step process worked for me so I continue it on a daily basis is hopes to have more "getting real" conversations with my 2 boys, 9 & 11 yrs old. I love you Dad and my boys Chase and Jesse, thank you for enhancing my life...with love Dad 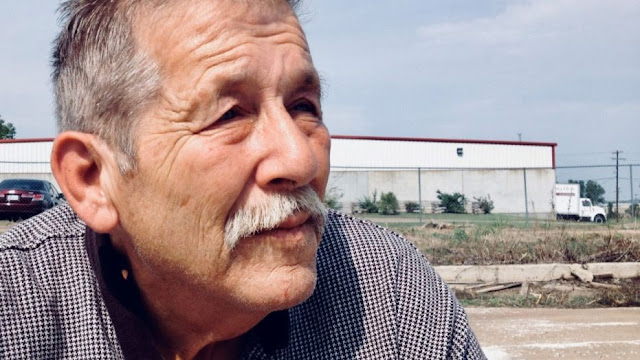 A few weeks after my first child was born, I told my dad off. At the heart of my complaints was one central failure: Ever since I was a kid, he had failed to show up.

My dad was an affectionate father but he just couldn’t stay put. When things got ugly between him and mom (and they often did), he would suddenly pack up and disappear for a while. We might know where he was; we might not.

Dad and Mom divorced when I was in eighth grade. Soon thereafter dad left again and I didn’t see or hear from him for three years. By that time, I had decided I hated him; but when he finally showed up again, I was lost in another one of his bear hugs in no time.

Although dad lived in another state, he got much better at keeping in touch, thanks to the proliferation of cell phones. But technology couldn’t save him from his old habits. Just when I would think I could trust him, he would drop the ball again.

At my college graduation, I searched the stadium, looking for him in the thousands of attendees – he forgot to come. He came to my wedding but skipped my low-key bachelor party the night before, opting to read a book instead. He was supposed to meet my wife and me one Thanksgiving but bailed at the last minute.

That kind of stuff happened time after time; and all the while, the pressure of unforgiveness was building inside of me until I finally blew up one night.

Dad and I were on the phone, and for some reason, he brought up an awkward memory he had mentioned many times before.

“Joshua, you know, I still can’t forgive myself for that time I spanked you so hard when you were a little boy. I still remember the way you cried, and it just kills me.”

I found it odd – if not annoying – that dad held onto one, memorable mistake, not the whole list. He needn't worry. I was keeping up with it and I decided to confront him with every item. I told him off, recounting every failure like I was a prosecutor in a closing argument.

Finally, I rested my case, took a deep breath and waited for dad to push back. He didn’t. Instead, he did something beautifully bizarre: In his soothing, tenor voice, he sang a line out of an old song about being sorry for hurting the one you love. Then he apologized.  He meant that apology, and I knew he meant it because he changed his behavior. He bought a plane ticket to come see his new granddaughter, even though he didn’t have much money. He got Christmas presents for my kids. He started asking questions on the phone and really listening to the answers. Most importantly, he offered to apologize again if I ever needed to hear it. I didn’t.

Dad’s genuine contrition took the fun out of holding offenses against him. In choosing weakness, his love became stronger than my hurt. All of us dads have damaged our kids in some way, and those father wounds run deep. Our children were born believing it’s our job to protect them, and it’s one of the most hurtful, confusing things when we’ve done the opposite.

We can extract some of the poison of our failures by offering an apology to our kids, no matter what their age – and I’m not talking about, “I’m sorry if I ever did anything that hurt you.”

You know what you did. Apologize for that and do it with a specific, unequivocal admission of guilt, expecting nothing in return – not even their forgiveness. You’ve got nothing to lose but your pride, and you’ve got everything to gain if there’s even a chance it will bring healing.

Your kids ought to honor you – it’s even one of the Ten Commandments. But if you want to make it easier for them to do that, have enough honor to be like my dad, say you’re sorry and make things right.

Joshua Rogers is a writer and attorney who lives in Washington, D.C. You can follow Joshua on Twitter @MrJoshuaRogers and Facebook, and read more of his writing at JoshuaRogers.com. You can also subscribe to emails with updates about his writing.

I'm a guy in long term recovery and part of Present Moments Recovery in North County San Diego. I don't write very often but I do post some relevant articles on Twitter @pmr4recovery and @bythesearecover. If you or your family wants to talk recovery and how to get started on your journey, or just find a good meeting in San Diego, give us call 619-363-4PMR (4767)